A New Zealand student of genetics and biochemistry trying to hone his communication skills. Includes analysis of new science research, explanations of cool things, and the odd purple passage


Links to the rest of the net

Beauty in Science and Nature

Other links of interest

Aramoana is a tiny settlement (home to 260 people) on the mouth of the Otago Harbour - about 20 minutes drive from my flat in Dunedin. In New Zealand the settlement's name is almost completely synonymous with a tragedy that played out there 16 years ago. On November 13th 1990 David Gray, a reclusive, gun collecting schizophrenic shot and killed 13 people before he was himself killed by armed police.

The Aramoana tragedy was unlike anything we had ever experienced in our own country and I imagine the settlement of Aramoana will be associated with the events of that day for a long while yet. It would be a shame though, to let this be the limit of Aramoana's impact on the New Zealand psyche. Aramoana is a wonderful place, home not just to 260 people but to scores of wading birds, shags, penguins, seals, insects and most importantly no aluminium smelters.

You see, back in the 1980s a group of New Zealand and Australian corporations wanted to come into Aramoana and build a new smelter to turn Australian mined bauxite into valuable aluminium. The problem was their plan involved, destroying the settlement and much of the salty mudflats that are the basis of its unique biological abundance. The government of the day had a very interventionist economic policy and was keen on paving the way for major projects to go ahead with little regard for their environmental impact. Thankfully the people of Aramoana (including local artistRalph Hotere who produced a series of paintings in protest) weren't so lapse - a grassroots movement developed that spread through the country . In December of 1980 the people or Aramoana officially seceded from New Zealand. The publicity their moves bought allowed them to sell official stamps and passports for their new independent state to help fund their opposition to the proposed smelter. Eventually the movement grew strong enough that it's voice was heard, the government decided the proposed smelter was unlikely to commercially viable and not worth the damage it would cause. With no government backing one of the Australian corporation chose to back out and the was off for good.

With this, other story of Aramoana in mind I have made a few trips out to the settlement in recent weeks, and even remembered to bring a camera once. This first pic I am going to share with you about sums up the 'other' Aramoana story to me - that with a little effort humans can actually make a positive impact on the environment 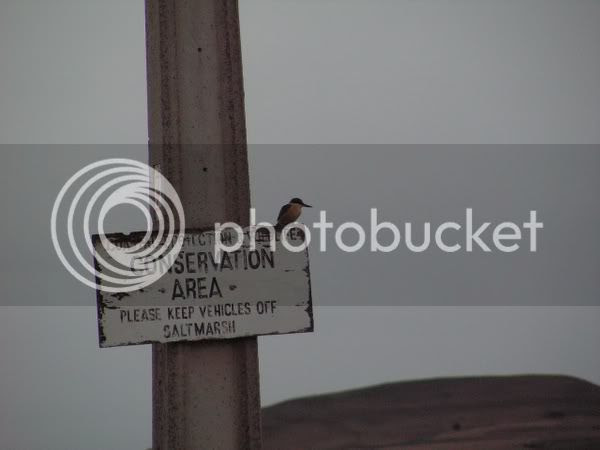 That's just one of the dozen or so New Zealand Kingfishers (Kotare or Halcyon sanctus vagans) I saw in about a hundred metre stretch of mudflats. These guys would perch upon a stump or a sign looking downwards before they lurched at some target below them, freefalling until they were a few metres above the ground at which point their brilliant blue wings would flap slowing their descent and finally pulling them back up, occasionally with a fish or crustacean in tow. The slat marsh and mudflats are the jewel in Aramoana's crown - as well as the kingfishers there are godwits which undertake a remarkable migration from China, oystercatchers like those photographed below, stilts, herons and over 80 species of moth (about 7% of all the species described in New Zealand) 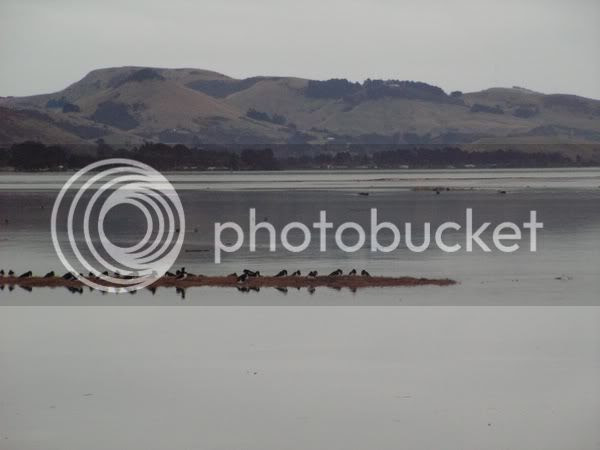 The other biological extravaganza at Aramoana comes in the form of the 1.2 km long man-made break water that just in the ocean (protecting the harbour from storms and the like. As well as making a permanent home for any number of molluscs ( several species of limpets, chitins and snails to my count) it also marks a spot where sea birds can get a feed. 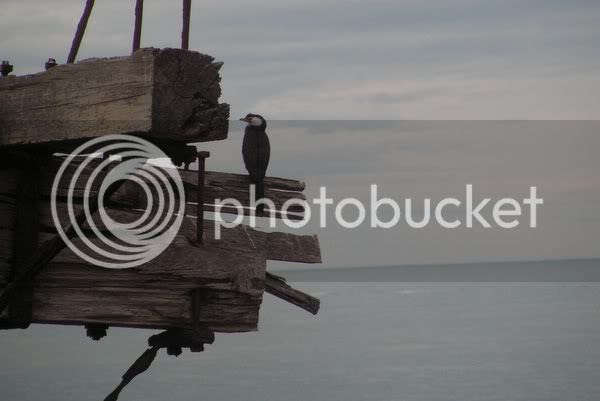 That's a shag, probably a little shag ( Kawaupaka, or Phalacrocorax melanoleucos brevirostris) like the star of Pete's rather more spectacular photos. Driving out to Aramoana you see almost every mooring post in the harbour is a sunning point for some shag or other, there are four species of shag commonly in the harbour and one of them (the Stewart Island Shag) has two colour morphs so their is a great deal of diversity. While I was inexpertly stalking the bird you see above my eye was caught by a flash of white plunging into the sea. The flash was a bird that looked a little like a small sea gull pinning its wings back and diving a break neck speed into the water, returning to the air almost immediately. Try as I might I couldn't get a photo of it in action but just as I was cursing my inabilities the bird in question, a white fronted tern (Tara or Sterna striata) chose to alight on a post about twenty metres away from me 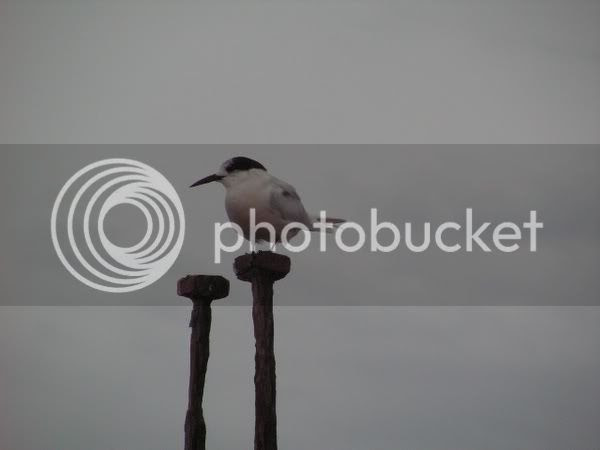 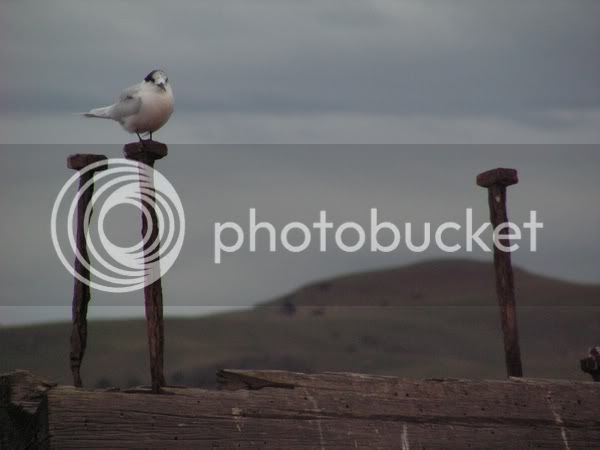 All of the photos I have shown you so far are form the second of my recent trips to Aramoana. On my first trip I was lucky enough to be accompanied by my beautiful girlfriend but not my camera (I have to say the first trip had the better company.) Thankfully my girlfriend is much more clever than me and brought along her digicam and was able to snap the image I am going to leave this post with. As we stood at the very end of the breakwater looking out at a few of the shags diving underwater in pursuit off a meal we spotted another bird swimming in an entirely different manner - with almost all of it's body submerged. It wasn't until this bird came ashore that we could see that it was one of the rarest penguins in the world (about 500 pairs breed here in the South Island and another 2000 on offshore islands)- the Yellow Eyed (Hoiho or Megadyptes antipodes). Yellow-eyed Penguins are famous for being very shy birds, usually scurrying from the sea to their nests (which are made in forest and scrub beside the sea) and quick to catch fright and return the water if they see people. For some reason this one was a little more gregarious, it surely must have seen us but was content to hop about from rock to rock for a little while and hold out it wings to the sun. Just another of the really special encounters all those people worked together to secure in the 80s 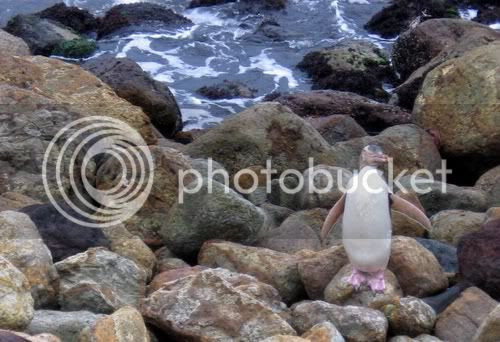 I love the images of the Aramoana area you said you would send me!
Check out http://irisarchives.blogspot.com/

Unknown, at 8:53 pm, March 16, 2010
This kind of information is very limited on internet. Nice to find the post related to my searching criteria. Your updated and informative post will be appreciated by blog loving people.

nintendo 3ds, at 2:57 pm, June 04, 2011
Thanks for taking the time to talk about this, I feel fervently about this and I take pleasure in learning about this topic.

contactos barcelona, at 10:03 am, November 28, 2011
Many thanks for sharing this post with us pianotiles2.com

Drag Racer V3, at 3:46 pm, August 07, 2017
I found a lot of information here to create this actually best for all newbie here. Thank you for this information.

alicetaylor, at 2:07 pm, August 25, 2017
I was working and suddenly I visits your site frequently and recommended it to me to read also. The writing style is superior and the content is relevant. Thanks for the insight you provide the readers!
www.appbaixar.com